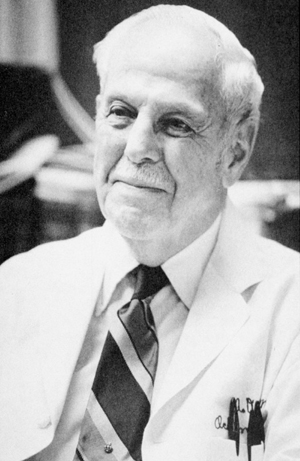 In 1939, Dr. Alton Ochsner, one of Ochsner's founders, was one of the first to discover the link between tobacco use and lung cancer. He then dedicated the rest of his life to educating the world on the dangerous effects of smoking.

Living the Legacy will be reflection of Dr. Ochsner's life's work and his breakthrough research.

In our opinion the increase in smoke with the universal custom of inhaling is probably a responsible factor [in the increase in pulmonary carcinoma], as the inhaled smoke, constantly repeated over a long period of time, undoubtedly is a source of chronic irritation to the bronchial mucosa.
- Alton Ochsner, MD and Michael DeBakey, MD, 1939

When Drs. Alton Ochsner and Michael DeBakey published their groundbreaking paper linking smoking and lung cancer in 1939, even the idea that lung cancer cases were increasing was controversial. Plenty of physicians just didn't accept or believe the mounting evidence that lung cancer was on the rise.

But Alton Ochsner was seeing more and more lung cancer patients in the operating room, and many of them were heavy smokers. Proving the link between smoking and lung cancer, treating the disease, and finding a cure became the focus of his research and put him at the center of a scientific controversy.

For years, physicians belittled his research and called his theories pure speculation. But he was right.

And that may be his greatest legacy-his efforts to warn the public about the dangers of smoking.

The cartoon featured Mr. Butts, created by cartoonist Garry Trudeau, who first appeared in the comic strip when the character Mike Doonesbury is asked to create an ad that targets teenage smokers.

Want the latest on food and fitness, women's health, men's health, parenting and more? Sign up for our free newsletters!

Want the latest on food and fitness, women's health, men's health, parenting and more? Sign up for our free newsletters!

Find an Urgent Care Location Near You