Smoking’s Appeal: How Advertising Has Affected You 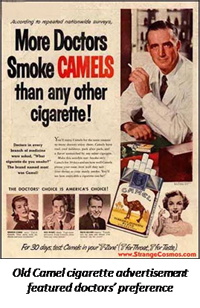 Smoking advertisements dramatically have shifted from glamorizing smoking to exposing the grim realities of tobacco use. According to the Federal Trade Commission, cigarette companies in the U.S. spend approximately $1.1 billion on marketing. Generations ago, tobacco companies advertised with messages like "doctor approved" and images of beautiful people enjoying life with cigarette in hand to increase brand awareness, preference and sales. Today, cigarette ads are one of the most highly regulated forms of marketing. Some or all forms of tobacco advertising are banned in many countries, including South Africa, Canada, and Japan.

Cigarette brands frequently sponsored U.S. television programs in the 1950s and ‘60s. Marketing then spread to magazines, newspapers and billboards in the ‘70s. However, in April 1970, Congress passed the Public Health Cigarette Smoking Act banning the advertising of cigarettes on television and radio starting on Jan. 2, 1971. 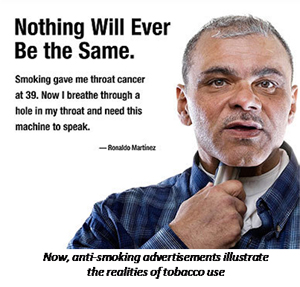 But as consumers continued smoking and tobacco companies acknowledged little about the health impact of tobacco use, federal organizations took an organized stand against the marketing of cigarettes.

In March 2010, the Food and Drug Administration (FDA) reported that scientists had proven the link between tobacco product advertisements and promotion and adolescent tobacco use. To protect youths and adults, the FDA Center for Tobacco Products issued a new rule limiting the sale, distribution and marketing of cigarettes and smokeless tobacco.

To regulate marketing and advertising of overall tobacco use, the Tobacco Control Act includes new warnings for smokeless tobacco products and a ban on the manufacture of products that use the terms "light," "low," "mild" and similar deceptive descriptions. New requirements imposed relating to marketing (labeling, advertising and promotion) includes:

Now, formerly colorful store displays and ads are now in black and white, tobacco advertising is banned near playgrounds and schools and cigarette makers are required to display graphic warnings on packaging.

Unfortunately, federal regulations and other efforts are just one of the many changes needed to limit tobacco use. We hope to make a change in our community by moving to a tobacco-free environment as of April 1, 2011.

What Do You Think?

What do you think of the FDA's plan to require cigarette packages to have larger and more visible graphic health warnings? Please send your thoughts to tobaccofree@ochsner.org.

Your online health resource for health information, nutrition tips and advice from our medical experts

Find an Urgent Care Location Near You